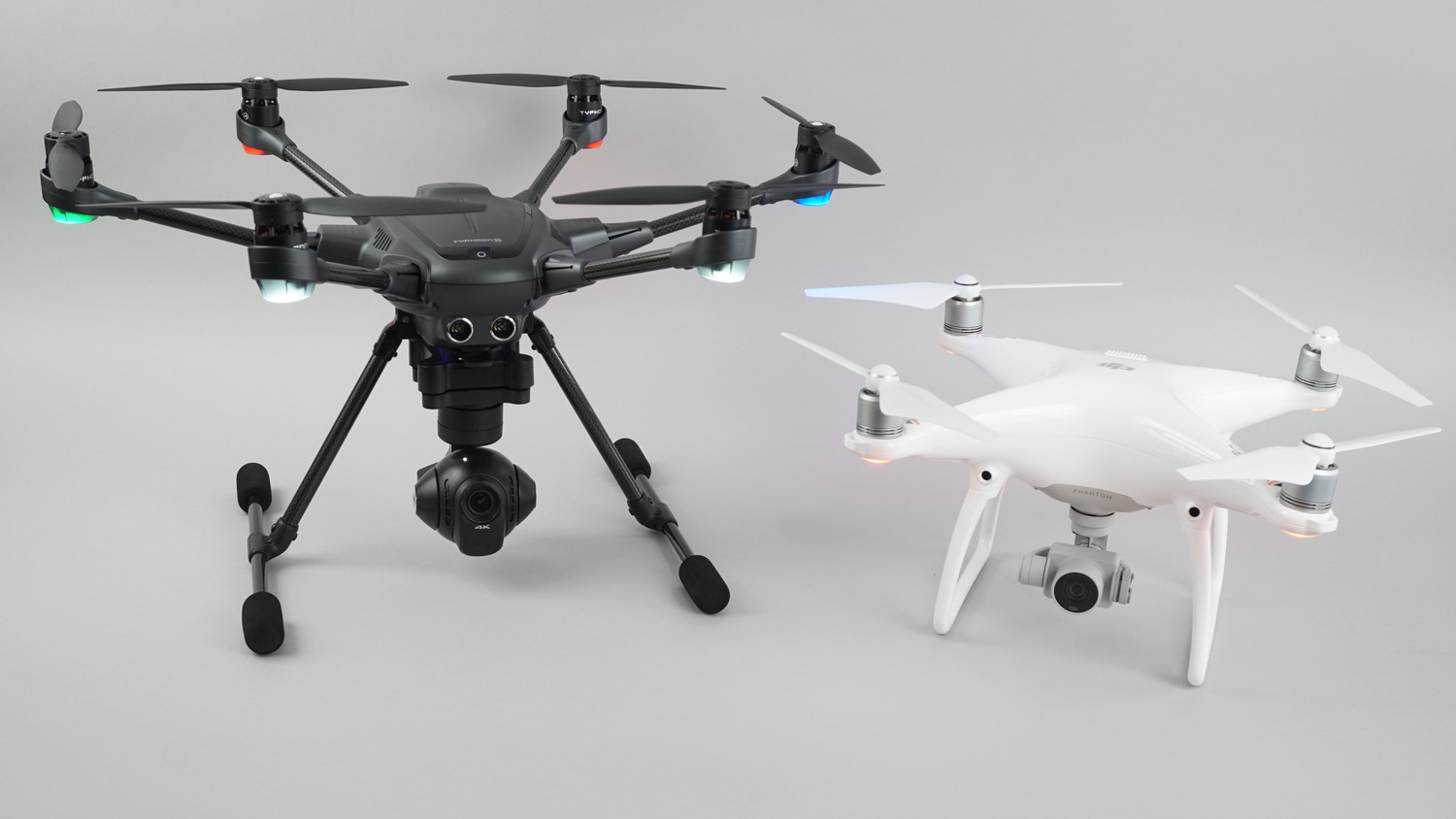 DJI has been running the show when it comes to the consumer drone industry, most recently with the debut of the DJI Phantom 4, but DJI has now found a worthy competitor in the new Typhoon H by Yuneec.

The Typhoon H offers up a number of exclusive features including six rotors, a camera that turns 360 degrees, retractable landing gear, and a built-in touch screen remote controller. The Typhoon H also features its own obstacle avoidance system which uses sonar detection to give the drone the ability to avoid obstacles in complete darkness.

The Phantom 4 is the most recently released model in DJI's popular Phantom series, and is improved in both flight and functionality. The Phantom 4 possesses a fresh streamlined look, unique intelligent flight modes, a groundbreaking obstacle avoidance system, and an even longer battery life than the Phantoms before it.

Each drone comes with its own set of exclusive features and abilities. Though both the Typhoon H and the Phantom 4 are at the top of their ranks in the drone world, both bring different strengths and weaknesses to the table. 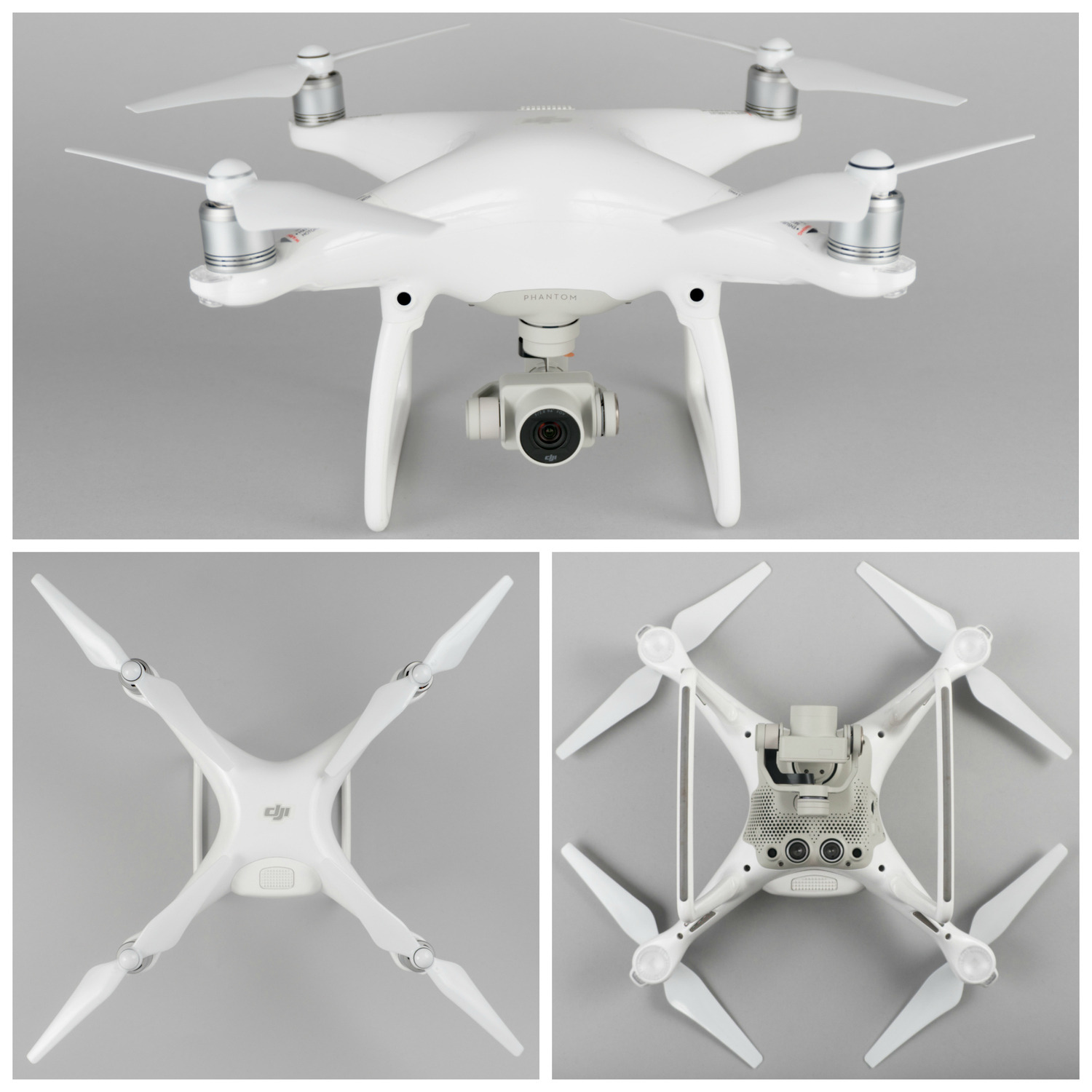 The Phantom 4 is designed with a high quality magnesium skeleton which helps reduce vibrations while in flight. The skeleton also moves the drone’s weight to its centre of gravity, increasing balance and stability in the air. 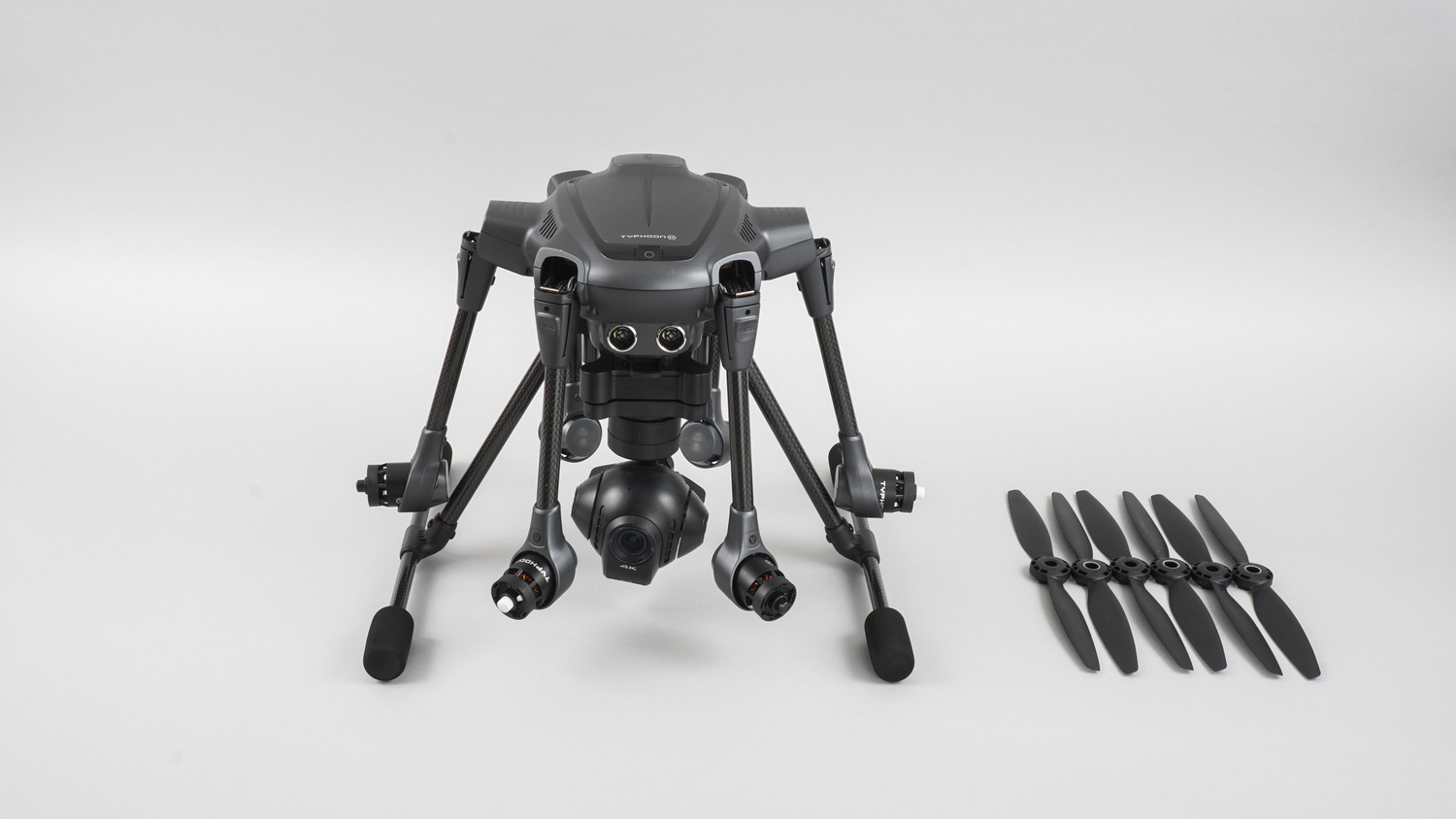 A significant difference in design when it comes to both drones is the Typhoon’s ability to retract and fold down its arms. This greatly improves the portability and ease of use of the Typhoon H.

While the Phantom 4 has 4 propellers, the Typhoon H has 6. The Typhoon's six propellers give the drone more stability as it can automatically adjust and fly if one motor fails in the air.

On the other hand, the Typhoon H comes with a remote controller installed with a 7" touch screen so buyers don’t have to purchase an additional tablet with their drone. The Typhoon H also has the unique ability to connect more than one controller to the drone. It comes with a secondary controller called the Wizard which can take-off, fly, and land the drone as well as execute smart shots. One operator can fly the drone while the other controls the camera, which is a big plus for those who want to solely focus on capturing footage.

If you are deciding between the Typhoon H or the Phantom 4 a major difference between both drones is the design of their controllers.

The Phantom 4 requires the user to attach a smart device or iPad to the remote controller in order to fly the drone. Though this can be an extra expense if an operator does not already own a tablet, the advantage is that the user can decide what screen size they want to have for their display. 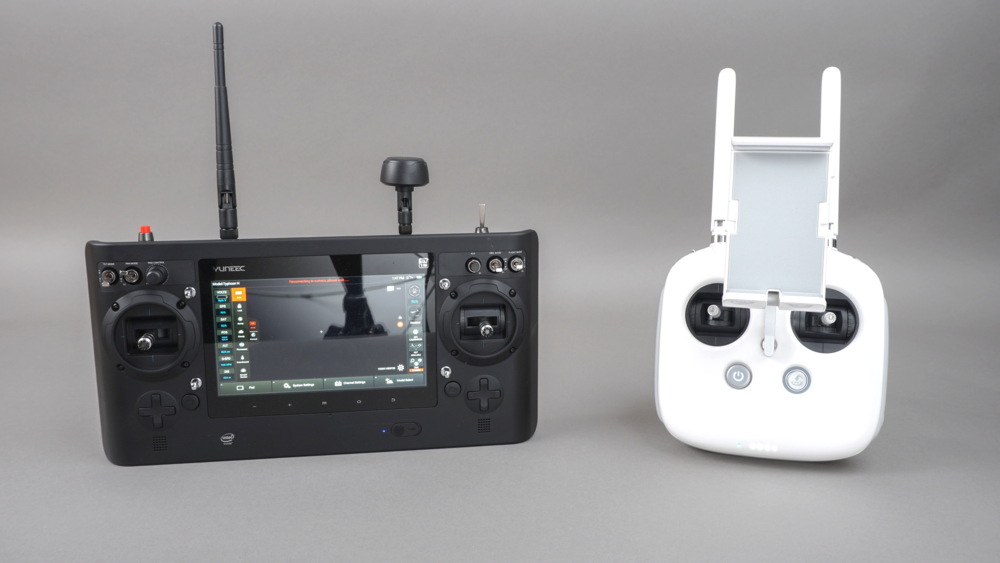 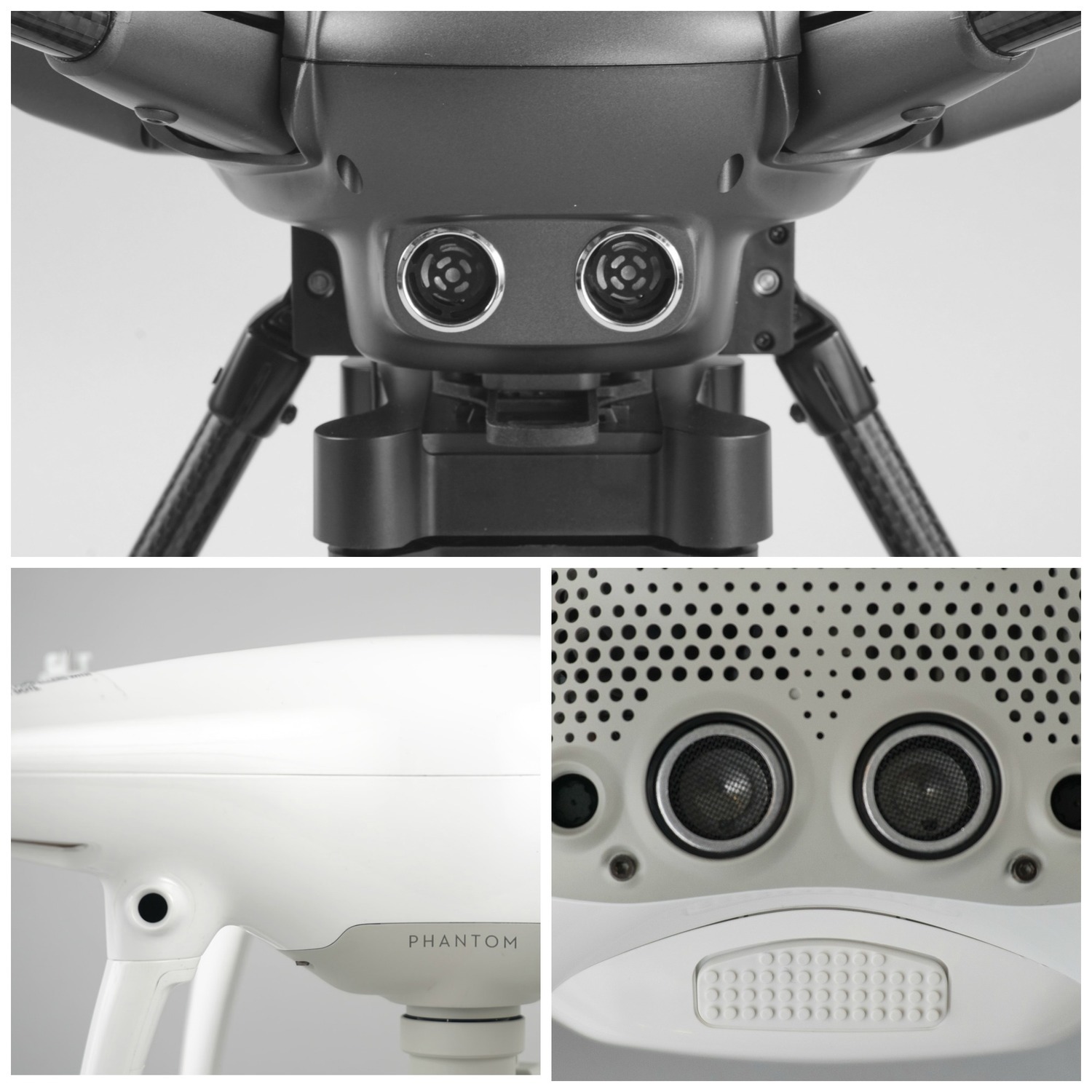 A drone with a good obstacle avoidance system is a huge benefit to any operator who wants to avoid any potential damage caused by a crash.

The Phantom 4’s obstacle avoidance system is the first of its kind and is built with five cameras, (one main camera, two on the front, and two on the bottom,) to help the drone examine its environment better than ever before. The 4’s obstacle avoidance system can detect objects up to 50 feet away, and the Visual Positioning System (VPS) has been enhanced to operate at altitudes of up to 33 feet, without GPS.

The Typhoon H boasts an obstacle avoidance system with an ultrasonic system named RealSense. The Typhoon H uses sonar sensors that use sound waves to bounce off objects and back to the drone’s front sensors.

Each drone differs significantly when it comes to the reach of their range. The Phantom 4 runs on its own Lightbridge system which enables it to have a range of up to 5 km. On the other hand, the flight controls for the Typhoon H are handled over a separate link with only a 1.6 km range and a video feed that is transmitted over a Wi-Fi connection. 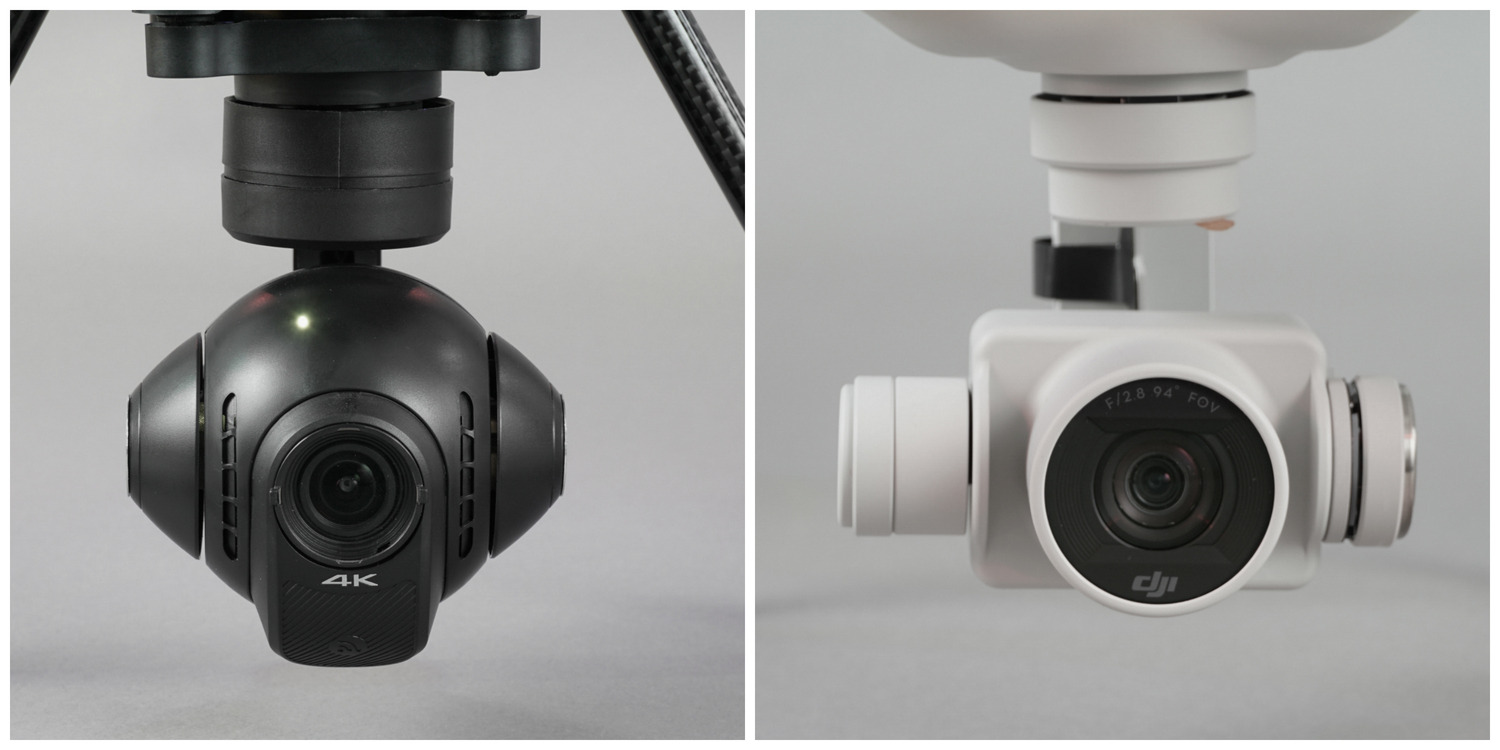 Both drones have high quality 12 megapixel, 4K cameras. Though both drones create crisp, high quality camera and video footage, the Phantom 4 has a fixed camera in comparison to the Typhoon H which is designed with a 360 degree rotating camera. The 360 degree rotating camera is a huge advantage for operators wanting to concentrate on getting the perfect shot. This feature is particularly good for capturing cinematic shots. 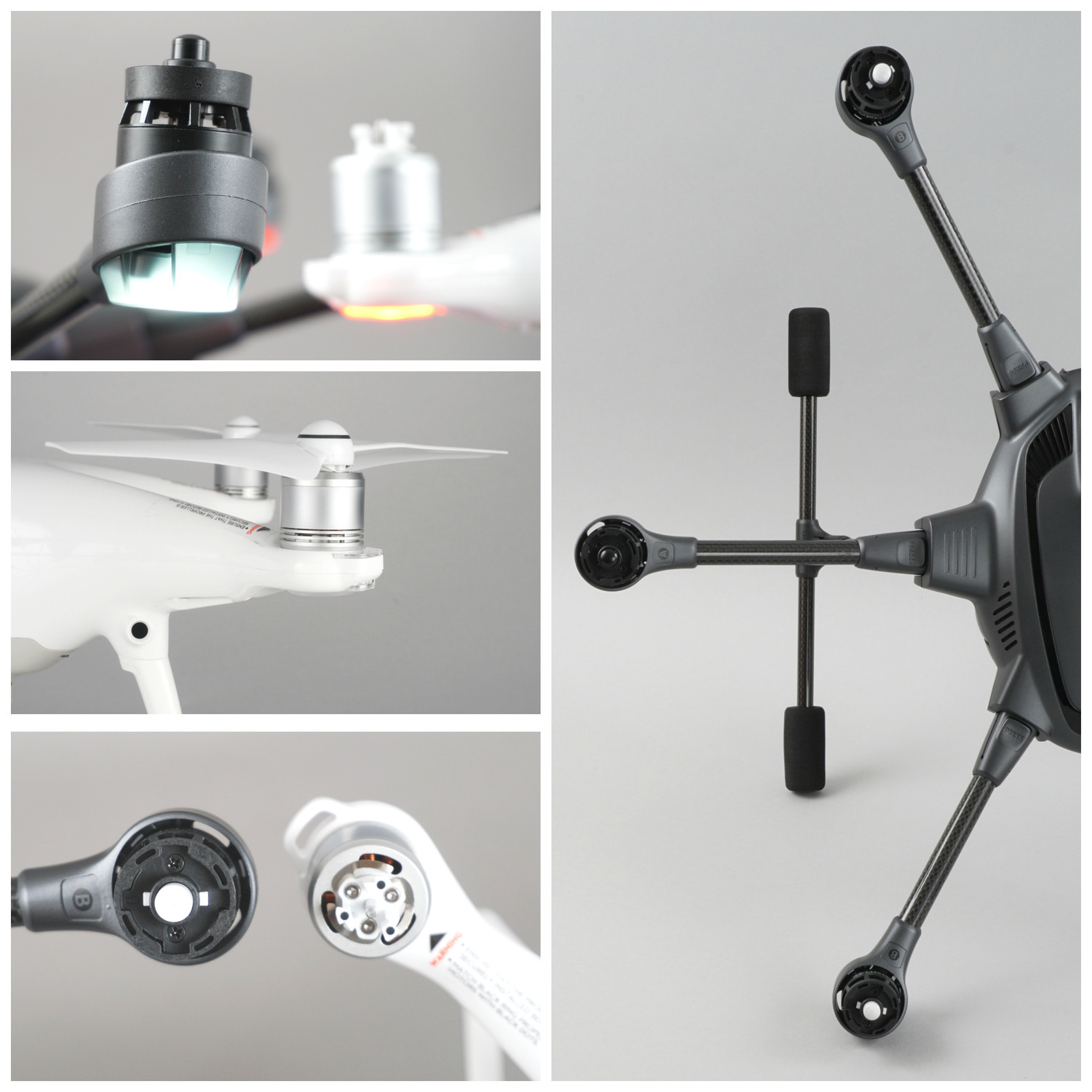 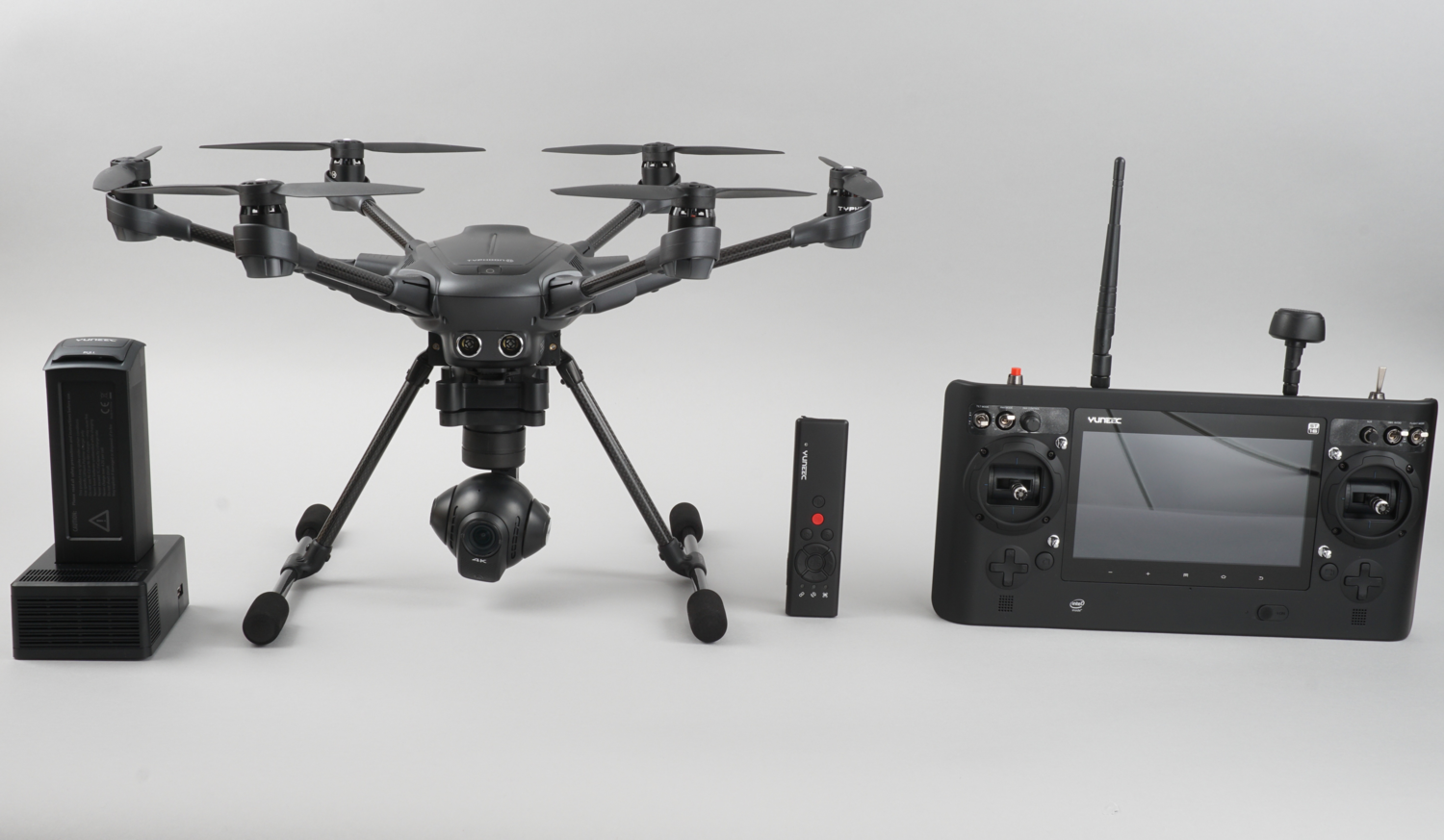 The Typhoon H is a two operator system that comes with; a remote controller, the Wizard (a secondary remote,) a charger, one battery, and 10 propellers. A big bonus with the Typhoon H is that users do not have to purchase a tablet or iPad as the controller comes with a built-in touch screen.

The Phantom 4 package comes with one battery, a remote control, a charger and a case. While the Phantom doesn’t come with an iPad or tablet, the case for the Phantom 4 is extremely durable and sturdy, and made with a high quality Styrofoam material. 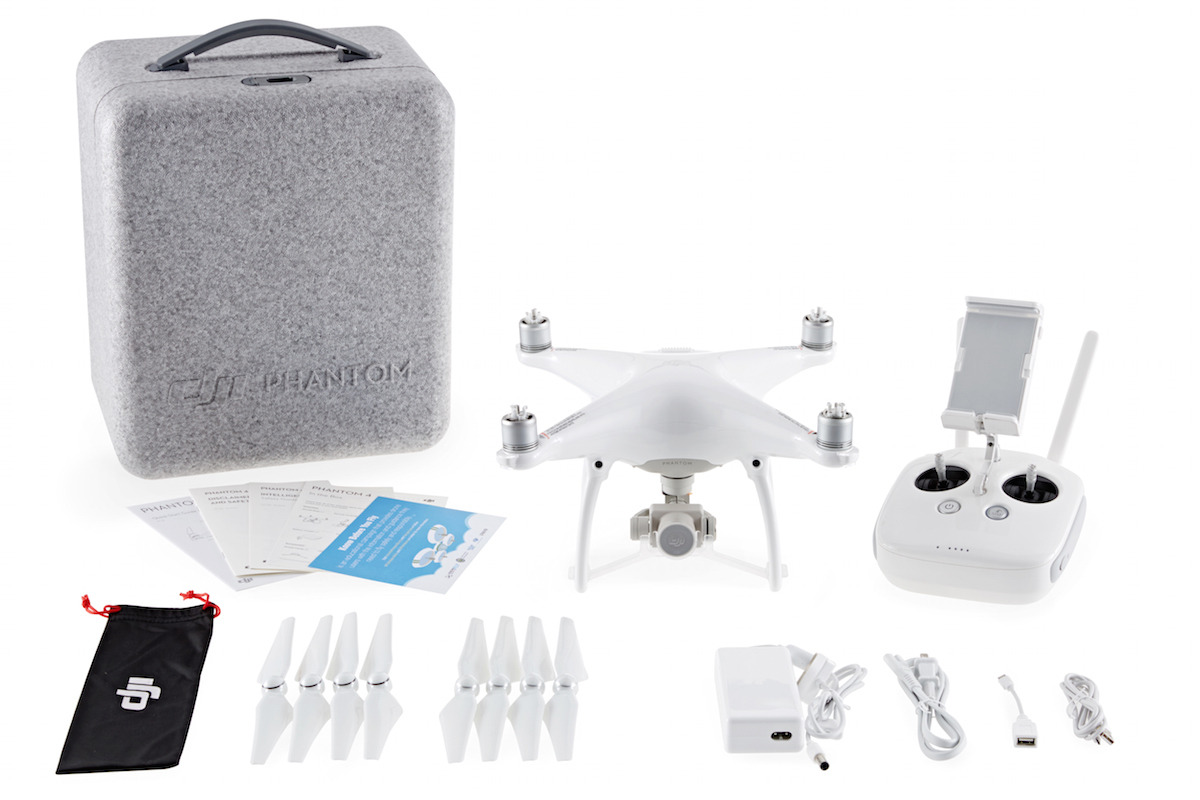 The Typhoon H and Phantom 4 both come with a number of unique intelligent flight modes. The Typhoon features six different intelligent flight modes including; Orbit Me, Point of Interest, Journey, Curve Cable Cam, Follow Me, and Dynamic Return Home. In Orbit Me mode, users can make their drone circle around the pilot. In this mode the Typhoon H will follow the operator even if they are moving around in the shot. In Journey, the operator can take a type of aerial selfie which will have the drone fly up to 150 feet back and forth from them to capture the perfect in-air selfie shot. With Curve Cable Cam, users can create waypoints to have the drone follow along an invisible route of pre-set coordinates. 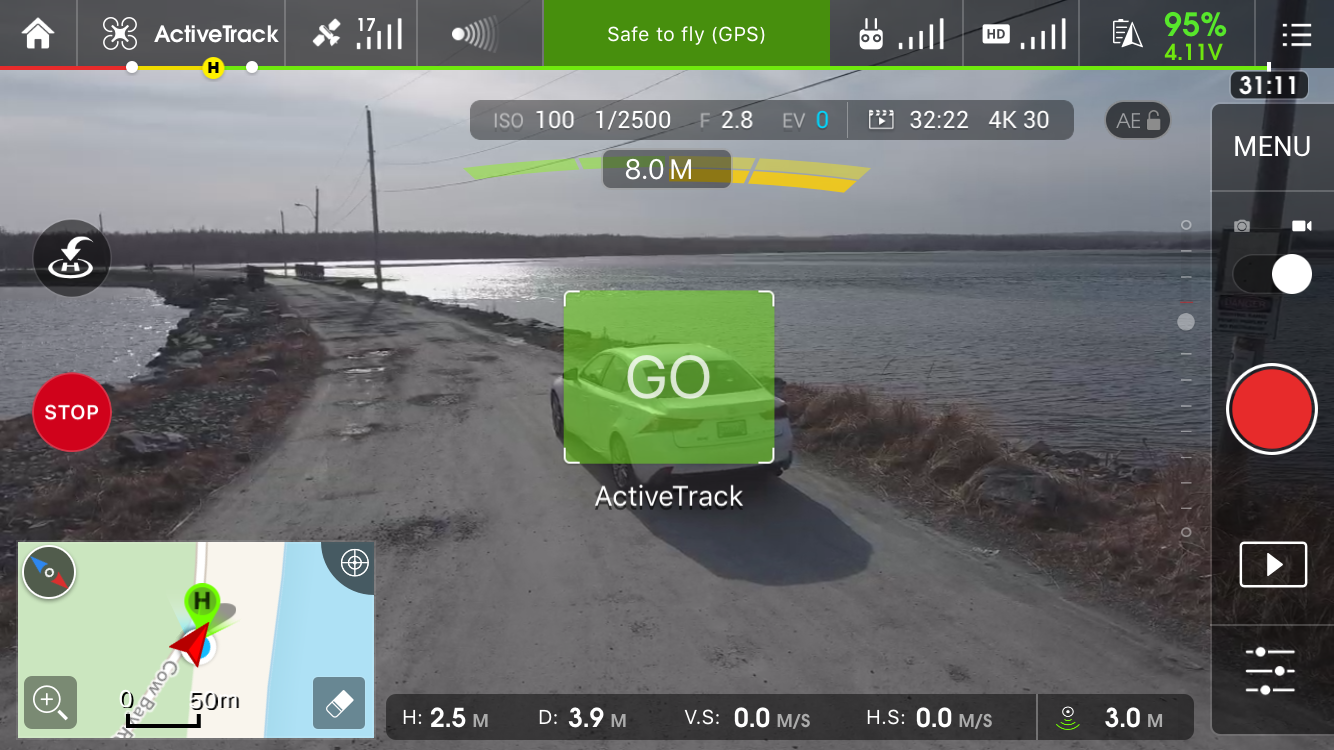 The Phantom 4 features innovative flight modes such as Tap to Fly, Follow Me, Active Track and Sports Mode. In Sports Mode, the Phantom 4 can fly up to 72 kilometres per hour at full tilt while still maintaining its Visual Positioning System. In Tap to Fly, users can tap any destination on their screen using the DJI Go app to have the drone automatically fly to that specific spot. With ActiveTrack, operators can tap an object on their app screen to have the drone autonomously follow that object and keep it in the centre of the shot.

Each drone carries distinct advantages and disadvantages depending on what the operator is looking to use them for. The Typhoon H comes with a camera that can turn 360 degrees and retractable landing gear. It also comes with a touch screen remote and the safety of six motors. On the other hand, the Phantom 4 has a longer battery life, an advanced obstacle avoidance system, and can reach higher speeds at longer distances. 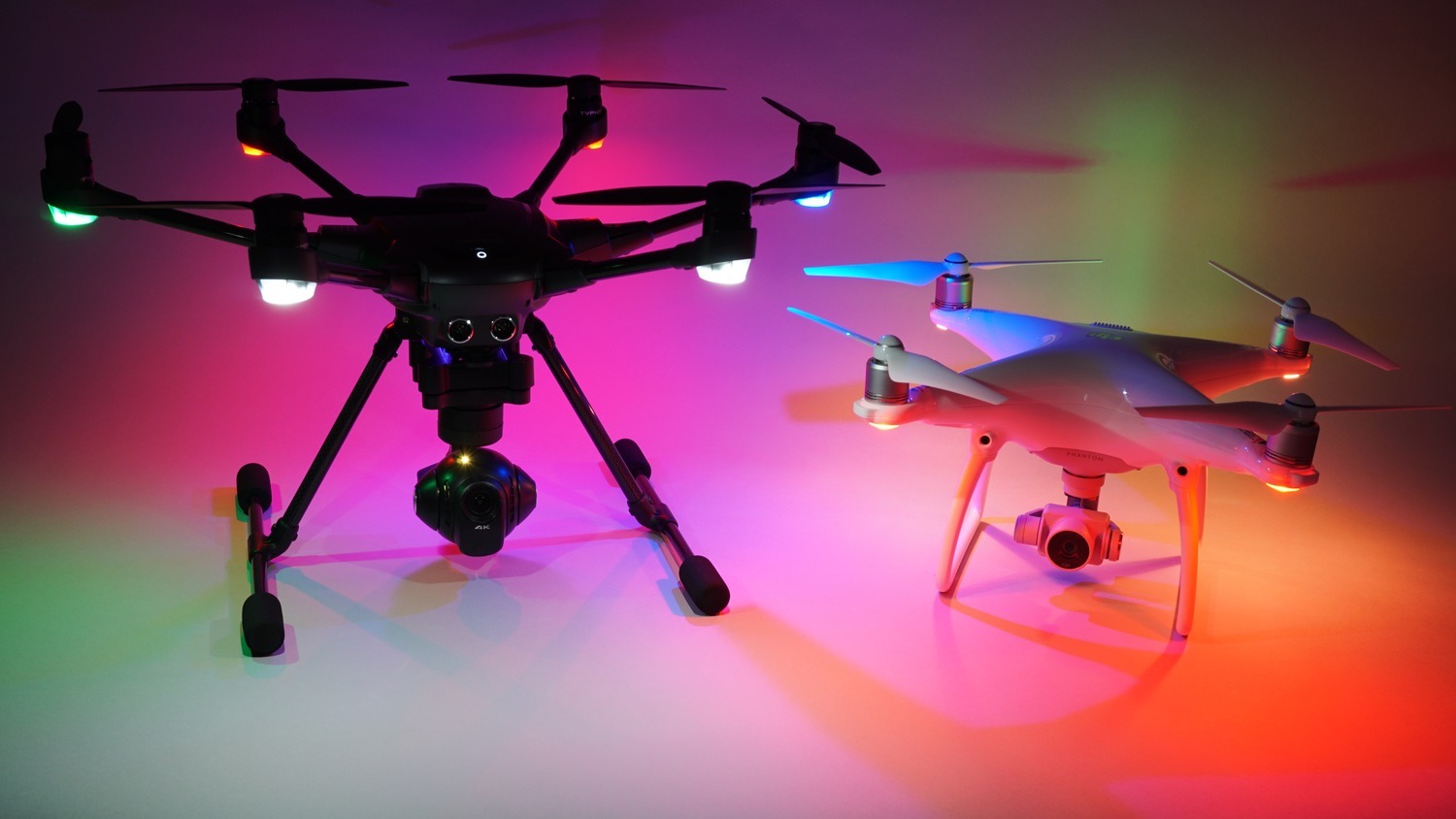 For the first time the Phantom 4 has found a worthy adversary in the Typhoon H. Overall, the six rotors on the Typhoon H make flights much safer and more stable. For those looking to save money and use their drone for primarily video production purposes, the Typhoon H is the way to go. However when it comes to overall usability, design, and functionality, users will get more out of the Phantom 4.