The Phantom 4 Pro is the newest drone in the popular series by DJI, that lives up to its namesake as a drone designed with professional usage in mind. With an upgraded camera, obstacle avoidance system, battery life, and range, the Phantom 4 Pro is the perfect drone to pilot through the air whether you are a hobbyist, or a filmmaking and aerial photography Pro.

The Phantom 4 Pro improves on the Phantom 4’s imaging and video capture capabilities with an upgraded camera that shoots 4K/60fps at a bitrate of 100Mbps and stills up to 20-megapixels. The Phantom 4 Pro also comes with added improvements to its obstacle avoidance system and flight time. The FlightAutonomy system adds dual rear vision sensors and two imaging cameras for a total of 5 directions of obstacle sensing. The Intelligent Flight Battery has also increased capacity by 520 mah for an extended flight time of 30 minutes. There are even brand new ActiveTrack and TapFly functions to capture new and exciting shots.

As an extension of the Phantom 4 but with huge improvements in features and camera quality, the Phantom 4 Pro is the perfect drone for pilots looking to shoot cinema-quality imagery from the skies.

Visually the Phantom 4 Pro’s camera looks similar to the one on the Phantom 4, but it has received some major upgrades that separate it from the pack. The Phantom 4 Pro uses a 1-inch CMOS 20-megapixel sensor and has a manually adjustable aperture from F2.8 to F11. 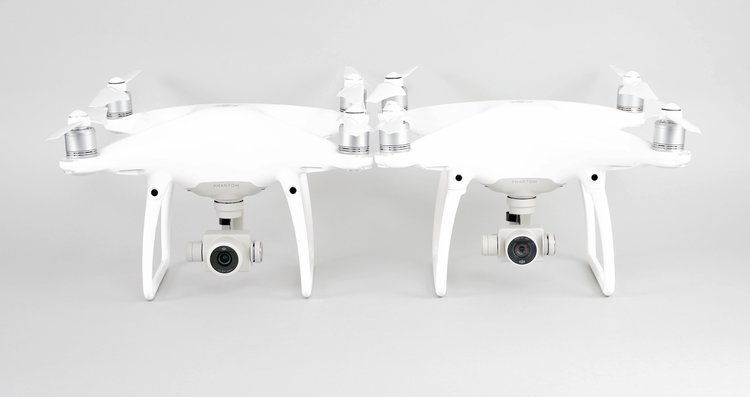 The ISO range of the Phantom 4 Pro has been upgraded with a range of up to 6400 in video and 12800 in still images when set in manual mode. Additionally, the bitrate has been improved from 60 Mbps up to 100 Mbps for much higher quality video. The Phantom 4 Pro can allow users to even use a Micro SD card up to 128 g.

Overall, the Phantom 4 Pro's large sensor enables the drone to capture incredible detail in every shot taken, with much richer colours. The final product being extremely high quality footage and stills worthy of the big screen. 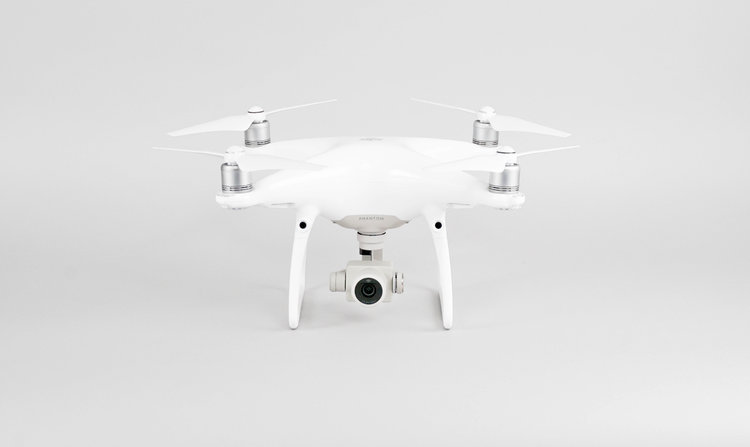 Avoiding any crashes is now made that much easier thanks to the DJI Phantom 4 Pro's new obstacle avoidance system. The Pro's 360 infrared sensing system now has side, back and front facing sensors. Its high resolution vision sensors can avoid obstacles in a range of up to 98ft or 30m, with a rear sensing system that also shares the same capability. 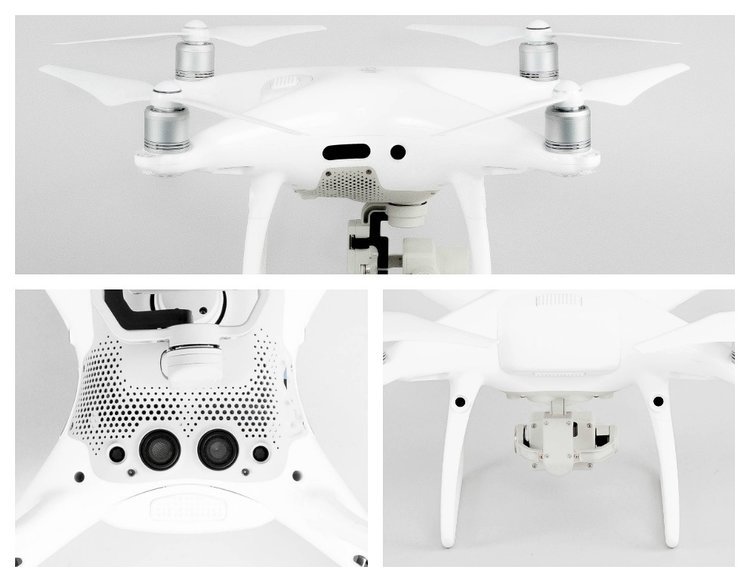 Additionally, the Phantom 4 Pro features infrared sensors on both sides of the aircraft, precisely detecting the distance between the aircraft and obstacles within a range of up to 23ft or 7m. The system will even tell the user the distance between the drone and an object in its path as it approaches. In Beginner and Tripod Mode only, the sensing system now has a sensing field with a 70° angle horizontally and a 20° angle vertically.

Though the regular Phantom 4 Pro comes with the same remote as the Phantom 4 which requires a mobile device or tablet, the upgraded Pro+ comes with a new built-in screen to give pilots added convenience and a remote that can last 4-5 hours. 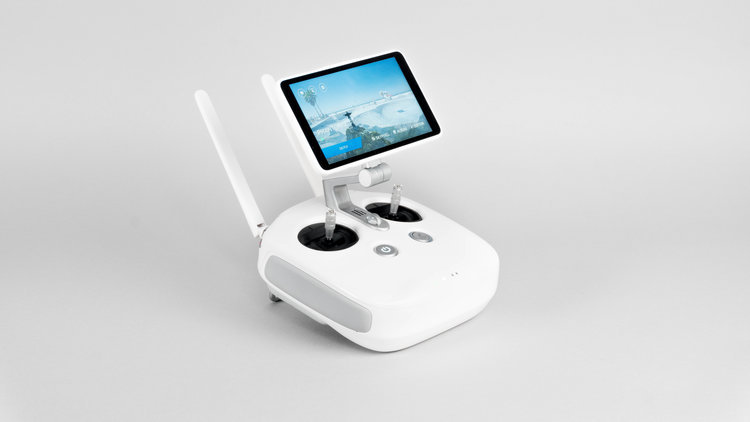 The biggest improvements with the remote controller is the newly added 5.8 g link. As many devices use the 2.4 g link frequency bandwidth which can potentially interfere with the wireless communication of the aircraft, the added 5.8 g link makes for a much stronger connection and will ensure that the drone's connection is not as easily interfered. 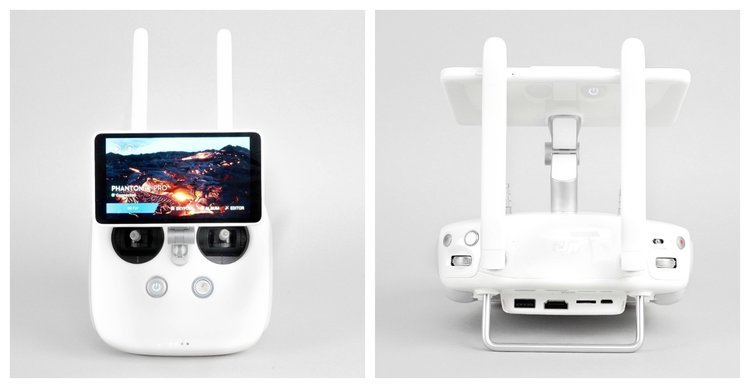 The most noticeable difference in the remote controllers is the Phantom 4 Pro+'s new, built-in display. The Pro+ features a 5.5" 1080p and 1000 nits display. Most iPads generally only have 400-700 nits, which means that the new Pro+ display is more than twice as bright as any regular tablet or Smartphone. Due to the higher nits, the screen can easily be seen in direct sunlight and be used in low temperatures. 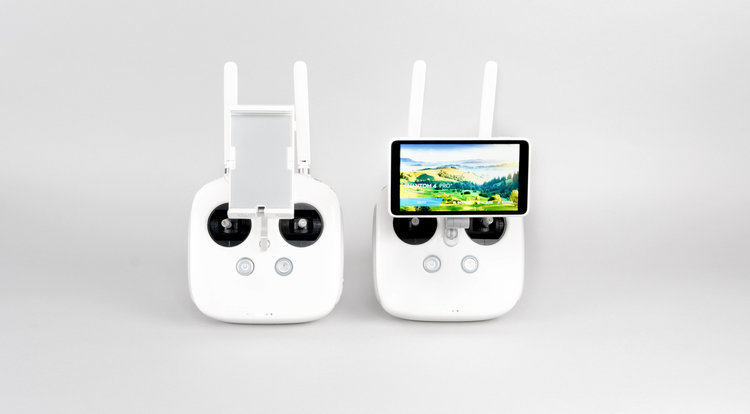 Another big plus with the built-in display is that users no longer need to have a mobile device. The new remote controller also features an HDMI port, a Micro SD Slot, a built-in microphone, and a speaker which allows for live streaming and video editing. Additionally, the remote has up to 5 hours of use on a full charge, so users no longer have to drain the battery of their Smart devices.

The Phantom 4 Pro includes Tap to Fly mode, so the user can tap anywhere on the screen and the drone will fly to that spot. The drone also features Active Track to track objects automatically and get better shots. In Trace Mode, the Pro will track a subject in front of or behind of the drone. In Profile, the drone will fly alongside the object for amazing profile shots. There is also a Spotlight mode where the drone will keep the subject in frame while being able to fly as freely as the user wants.

IIn the new Draw Waypoints mode, the user can easily trace a route on their screen and the Phantom 4 Pro will move in direction you drew while keepings its altitude locked. This gives the pilot more camera control and more freedom to create complex shots. 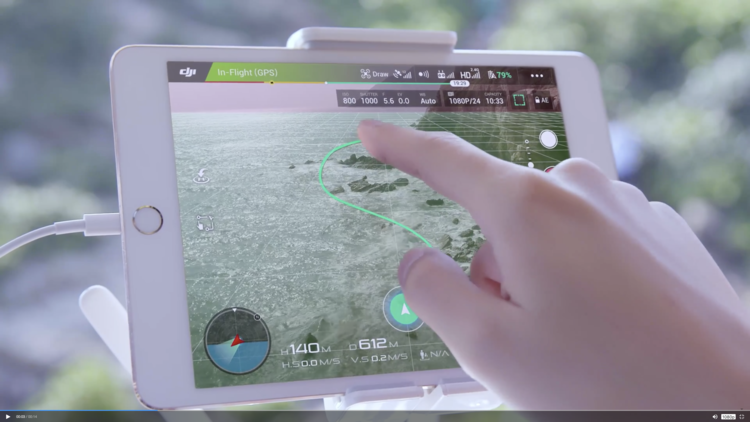 The Phantom 4 Pro also has an upgraded Return to Home mode, the system records its route as it flies allowing the user to return along the same route and avoid obstacles if the signal is lost. When taking off the Phantom 4 Pro will also get a picture of the scene below and compare the recording with what it sees when it returns for more precise landing. The Pro even detects whether the spot is suitable for landing. For example, if you are landing somewhere with obstacles or stones it will hover and alert the pilot.

Lastly, there is a Gesture (Selfie) Mode, which will recognize the subject and keep it in frame. When the user in frame lifts their arm, the drone will automatically capture the subject in frame and then a three second countdown will commence and a selfie will be taken.

The upgraded Lightbridge HD video transmission system offers an extended maximum transmission range of 7km and also enables the user to switch between 2.4GHz and 5.8GHz. The Phantom 4 Pro+ can additionally hold an even more reliable transmission thanks to the optional integrated display. 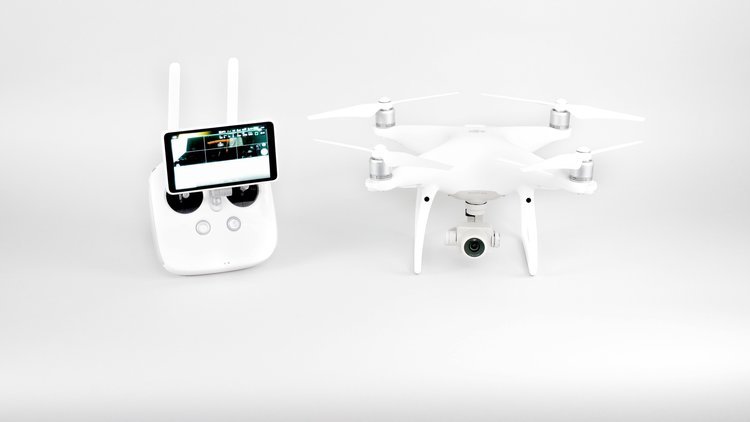 The Phantom 4 Pro is compatible with the regular Phantom 4 battery, but comes with the higher capacity battery to give the Pro an even longer battery life than its predecessor. The high capacity battery gives the drone more energy to power the system, making for a much stabler and powerful camera system.

Visually, the Phantom 4 Pro's design is extremely similar to that of the Phantom 4. The body is the exact same proportions as the 4, measuring 350 mm diagonally. The Pro also features the same sleek, clean, white look similar to Apple-designed products. 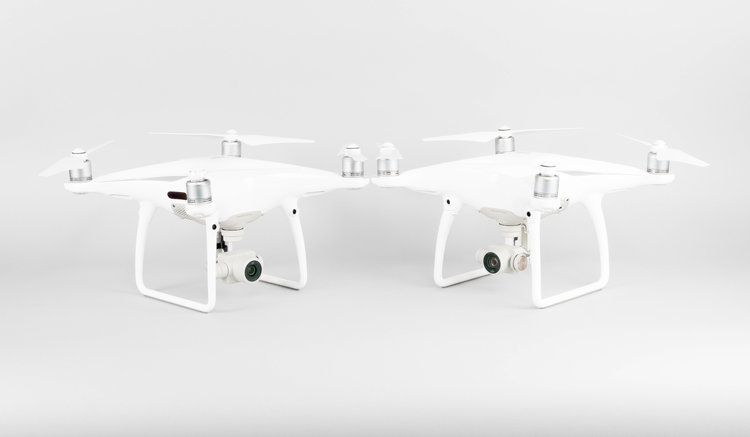 Due to the 360 obstacle avoidance system, the Phantom 4 Pro does feature new sensors on its sides giving it the ability to avoid obstacles in five directions. The Phantom 4 Pro additionally features rear sensors so any objects coming into its path will be avoided. 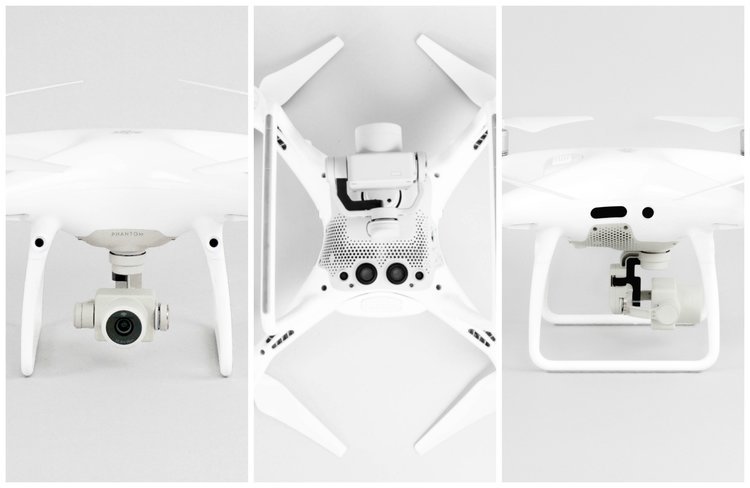 Thanks to its upgraded camera, obstacle avoidance system, longer battery life, and longer range, the Phantom 4 Pro is the perfect drone for usage by pilots of any level. The new upgrades optimize the way that it runs, and make the Phantom 4 Pro much more easy and fun to fly.