Before the highly hyped DJI Mavic Pro hit the airways, the Phantom 4 reigned supreme as the best-selling consumer drone on the market. However, with the release of the new Mavic Pro, DJI has designed themselves a worthy competitor that could finally take the Phantom 4's place as the most dominant drone in the skies.

Both the Mavic Pro and Phantom 4 were designed with ease-of-use in mind. Each drone comes equipped with a stabilized 3-Axis gimbal for maximum steadiness in the air, as well as a high-quality 4k 1080p camera.

The major advantage of the Mavic Pro is its revolutionary foldable design that allows the drone to be easily stored in any bag or pocket for maximum portability. This is in contrast to the Phantom 4's much larger size that requires a special case or bag to transport. The Mavic comes with a revamped obstacle avoidance system, brand new flight modes, and a more aerodynamic design that even for its size, makes the drone more stable in the air compared to the Phantom 4.

WIth its portable design and powerful system, the Mavic Pro could be the drone that could finally take the Phantom 4's place as the most popular and sought after drone for pilots of every level.

The Mavic Pro and Phantom 4 each feature a unique build and design that focus on quality, power, and ease-of-use. On sight, the Phantom 4 features a clean, Apple-like look, in contrast to the Mavic's darker more subdued appearance. 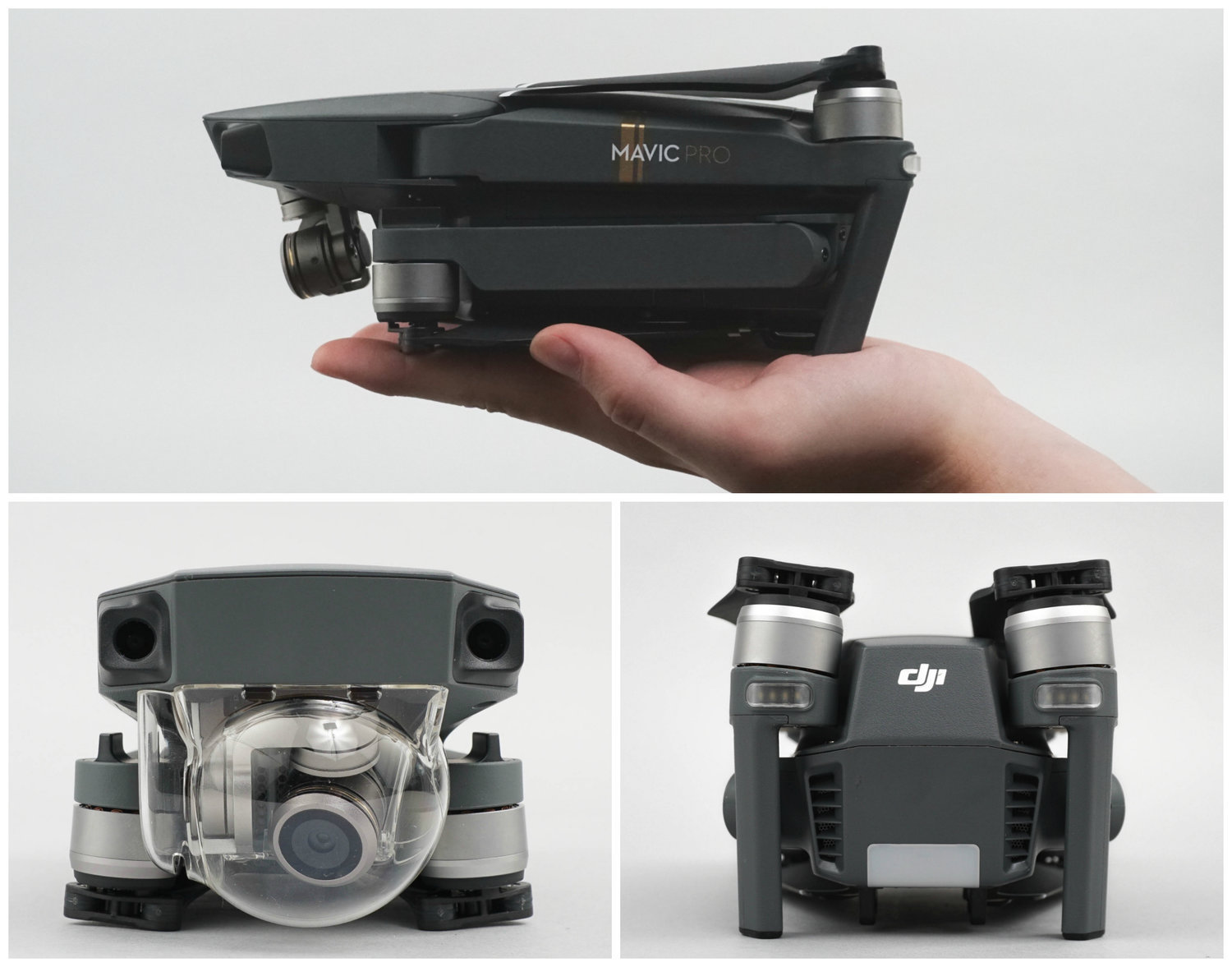 The highlight of the Mavic Pro is its fold-down design that enables the drone to fit comfortably in the palm of your hand. The Mavic's portability factor is a huge strength of the drones design, allowing users to easily take their drone wherever their next adventure may take place. The Mavic features quick-release foldable propellers, and motors that are very quiet in flight. The drone also features an extremely aerodynamic design that reduces air resistance. 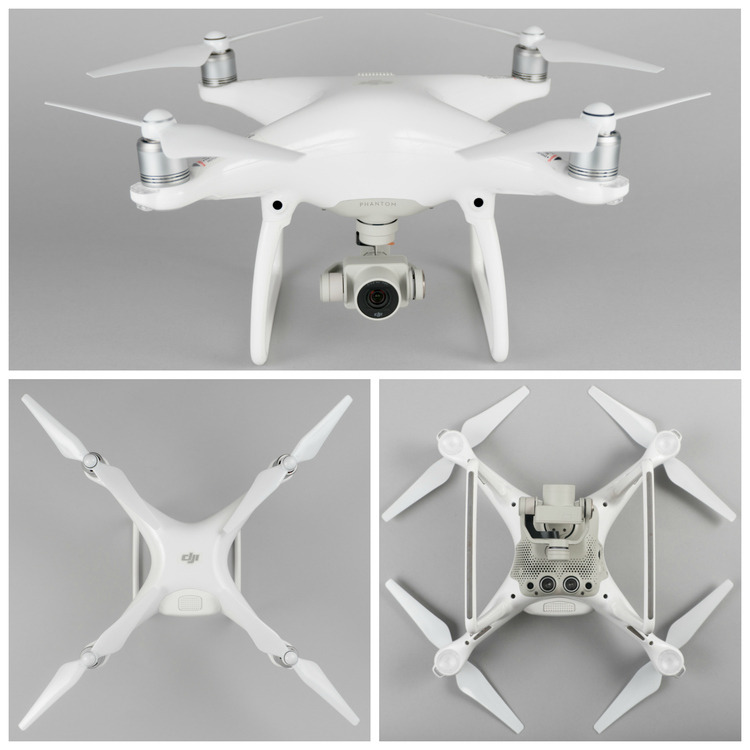 The Phantom 4 is made of high-quality magnesium that reduces vibrations in the air, and moves the drones weight to its centre of gravity for more stability. The Phantom 4 also features raised motors so the propellers show up less in camera footage.

The Phantom 4 weighs in at 1380 grams, in contrast to the Mavic Pro which weighs only 742 grams. The Mavic's smaller size makes it a much more attractive drone for users who travel or who are always on the go. As a drone that is half the size and weight of any other drone released by DJI, the Mavic Pro is the most lightweight and powerful drone on the market that can ensure that every minute in the air counts. 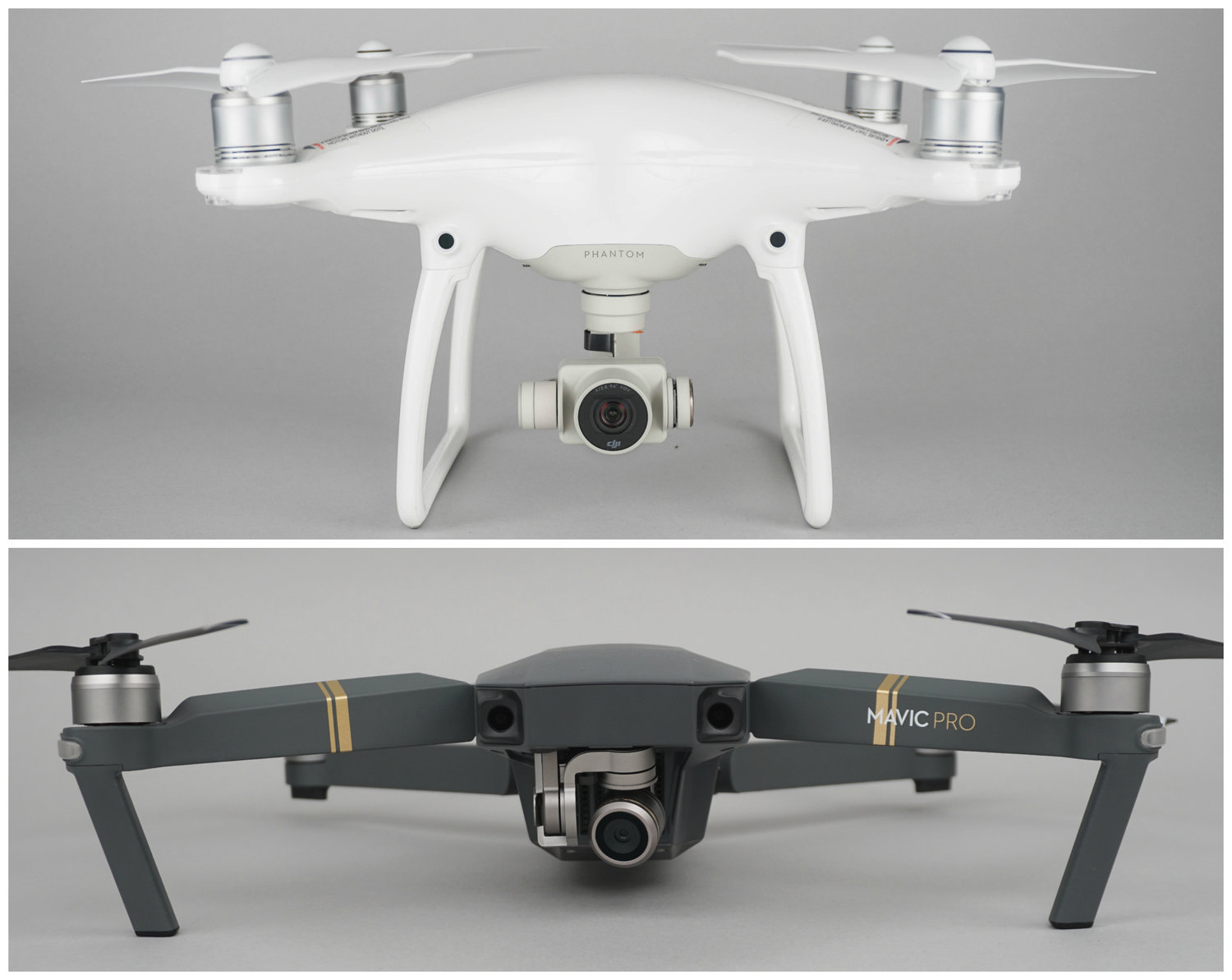 With the releases of both the Phantom 4 and the Mavic Pro, DJI stepped up their game when it came to creating sophisticated obstacle avoidance systems that could avoid potential crashes before they happened.

The Phantom 4's obstacle avoidance system features front-facing and bottom sensors, as well as two additional cameras for better depth perception. The system is limited to only being able to sense objects in front of the drone, and struggles during higher speeds or when trying to avoid smaller objects. 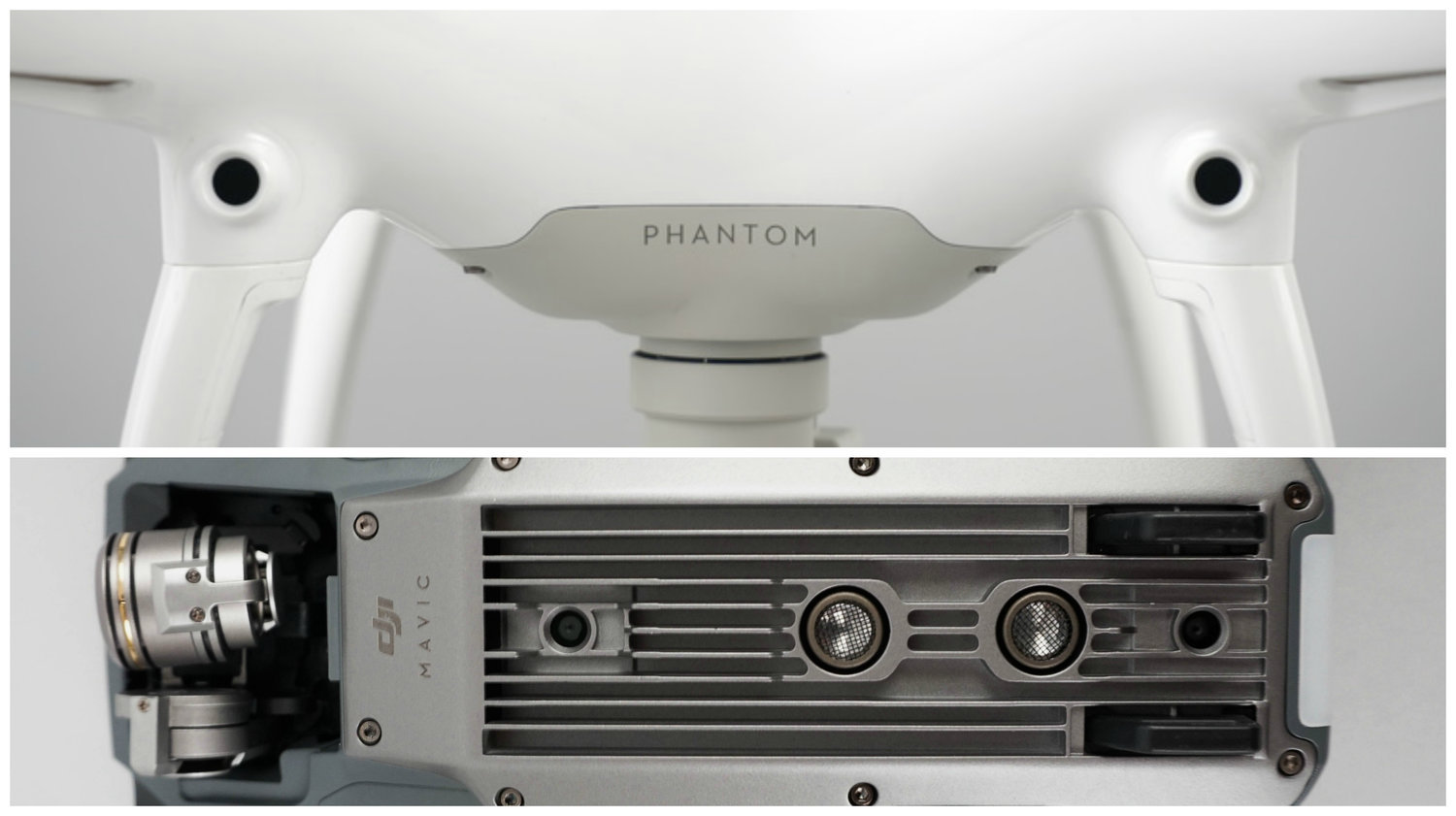 The Mavic Pro is made with an extremely well-rounded obstacle avoidance system, that not only stops the drone from hitting any nearby objects, but also gives pilots information through the remote controller to alert them if the drone is flying to near an object. The Mavic uses a front-facing obstacle avoidance system that can spot objects up to 50 feet in front of its path. The Mavic's obstacle avoidance system also combines the information of different elements including 2 cameras on the top and bottom of its body, the main camera dual-bad satellite posititiong (GPS and GLONASS,) 2 ultrasonic sensors, redundant sensors and 24 computing cores to make a 3D map to better detect obstacles in its path.

The Mavic Pro's obstacle avoidance system is overall a much more powerful, comprehensive, and effective system in comparison than the Phantom 4's, equipped with a larger range of technological advancements to better avoid accidents in the air. The Mavic's 24 computing cores also help the Mavic better detect and react to obstacles faster, even when flying at higher speeds in comparison to the Phantom 4. 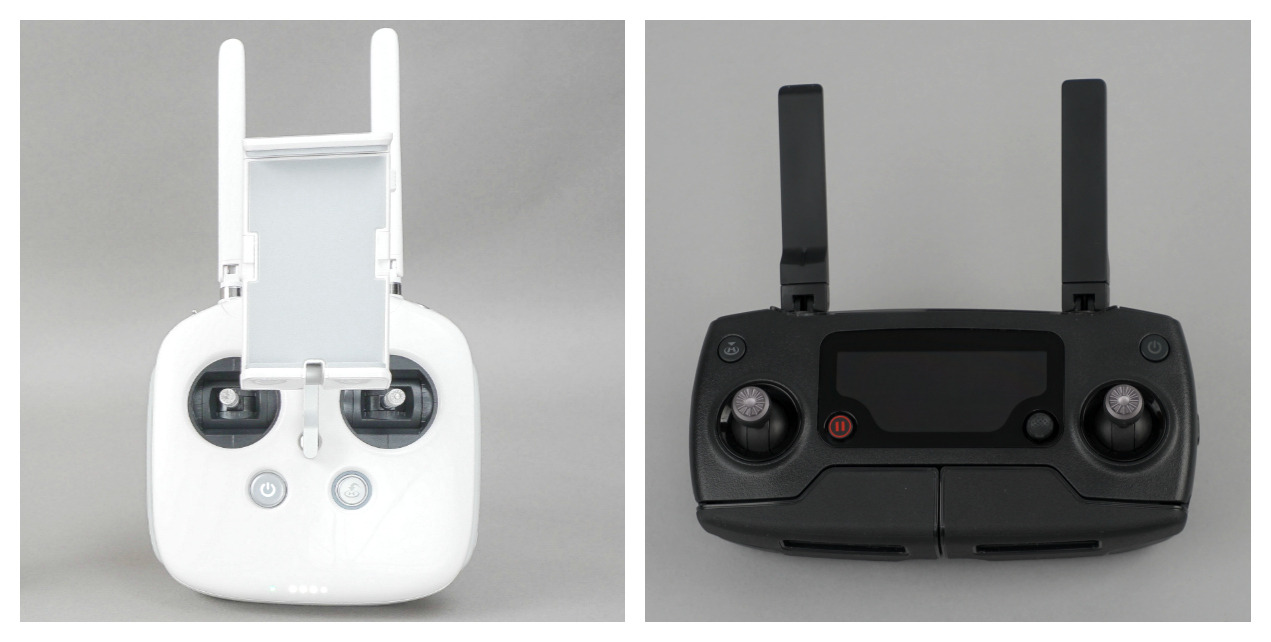 The Mavic Pro's controller features a built-in LCD telemetry screen display as well as 5-way directional analog sticks, and dedicated buttons such as Return-To-Home, and pause/play. The Phantom 4's controller requires a smart device or iPad in order to fly the drone, while the Mavic Pro requires a Smartphone between 6.5-8.5mm thick and up to 160mm long without a phone case.

The Phantom 4's controller features camera control functions such as photo and video preview or controlling gimbal motion. There is also a battery level indicator shown with LED indicators on the front of the controller. The Phantom 4 has a longer battery life than the Mavic Pro, as the Mavic's batteries are much smaller. 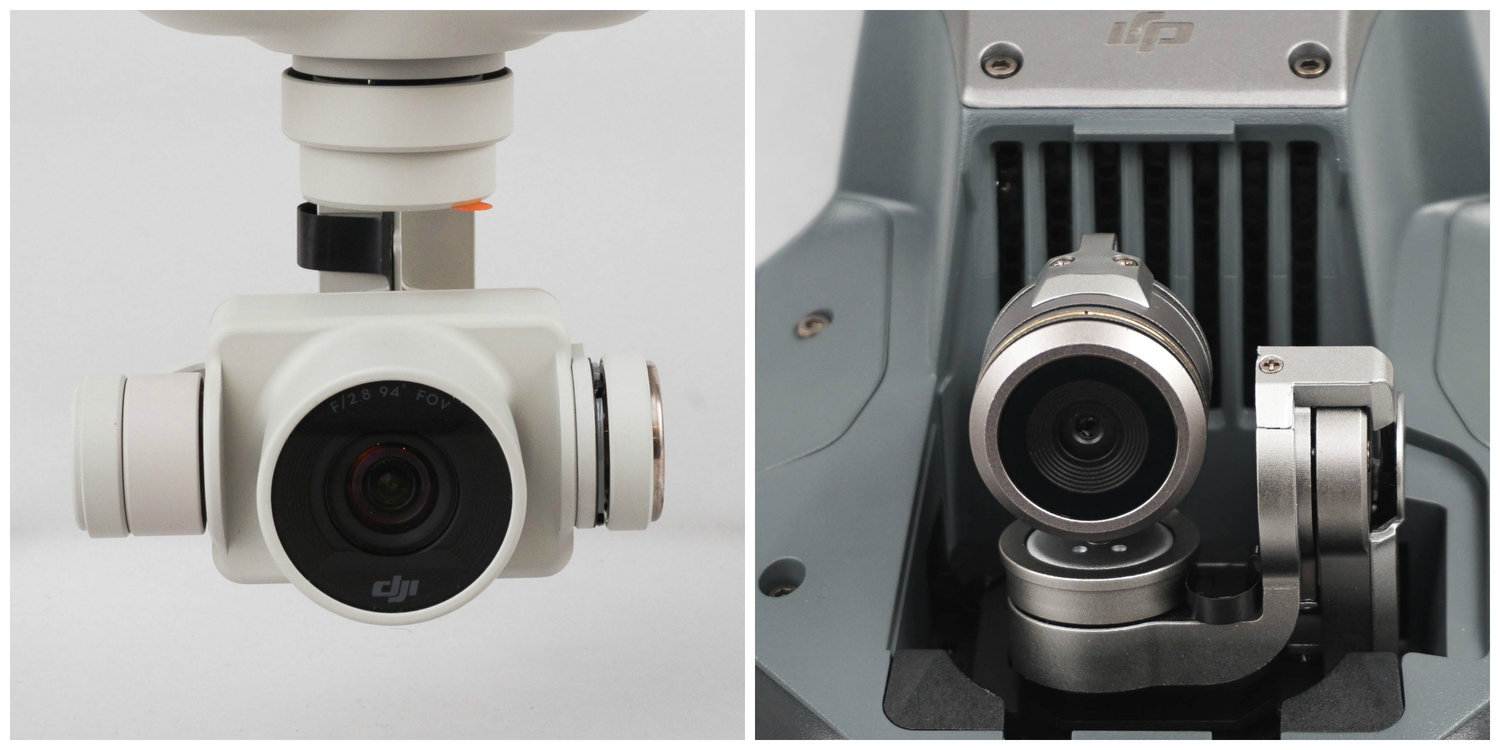 The Mavic and Phantom 4 are equipped with the same camera expect that the Mavic Pro's is significantly smaller in size and holds a few key differences. The lens on the Mavic is much smaller than the Phantom 4's and holds a much narrower field of view. The Mavic also lacks a fixed focus, which means uses have to tap areas on their display that they want to focus on. The Phantom 4's camera in contrast has auto focus. When shooting in full auto focus with the Mavic, pilots will notice the limitations of the Mavic's smaller sensor. 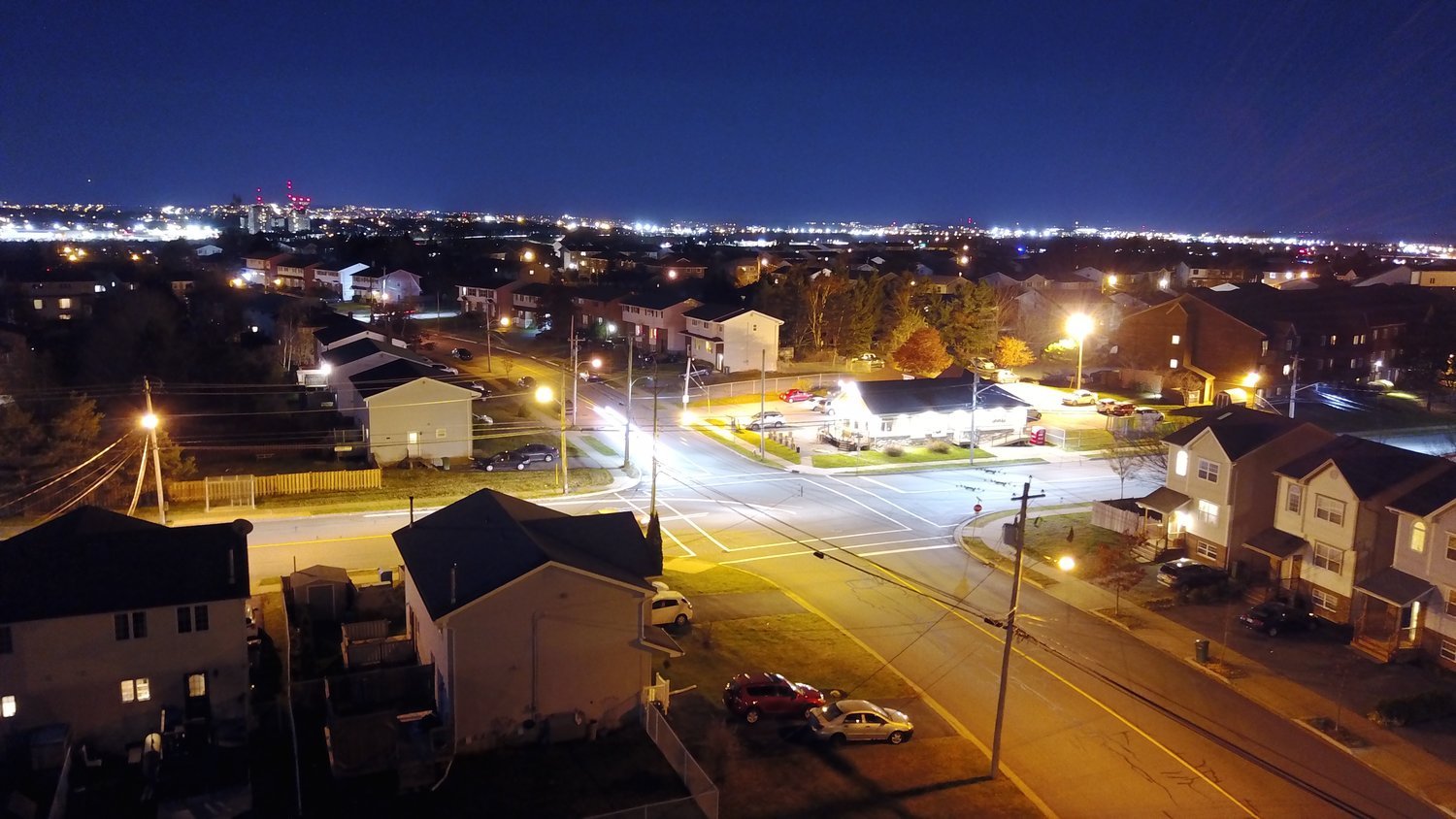 Both drones are designed with stabilized 3-Axis gimbal to eliminate shakiness and make footage as smooth as possible. The Phantom 4 features a U-Frame esign to keep footage balanced while the Mavic's gimbal and camera system are attached.

The Mavic Pro and the Phantom 4 are both capable of carrying out long flights at high speeds. The Mavic can fly for up to 27 minutes and can reach up to 40 mph in Sports Mode. The Phantom 4 has a slightly longer flight time of up to 28 minutes, and can fly even faster at 27 km/h.

The Mavic's Intelligent Flight Battery can support quick charging at approximately 2x, with a maximum charging power of 100w.

The Mavic's main advantage when deciding buyers are in the market for a drone is its portability factor and price. While both drones qualify as top-of-the-line consumer drones, and both come with great designs and specifications, the Mavic has more to offer for a lower price. Hobbyists and travellers will appreciate the Mavic's price range and added features. The Phantom 4 clocks in at $1,649.00, while the Mavic Pro retails for slightly less at $1,349.00. 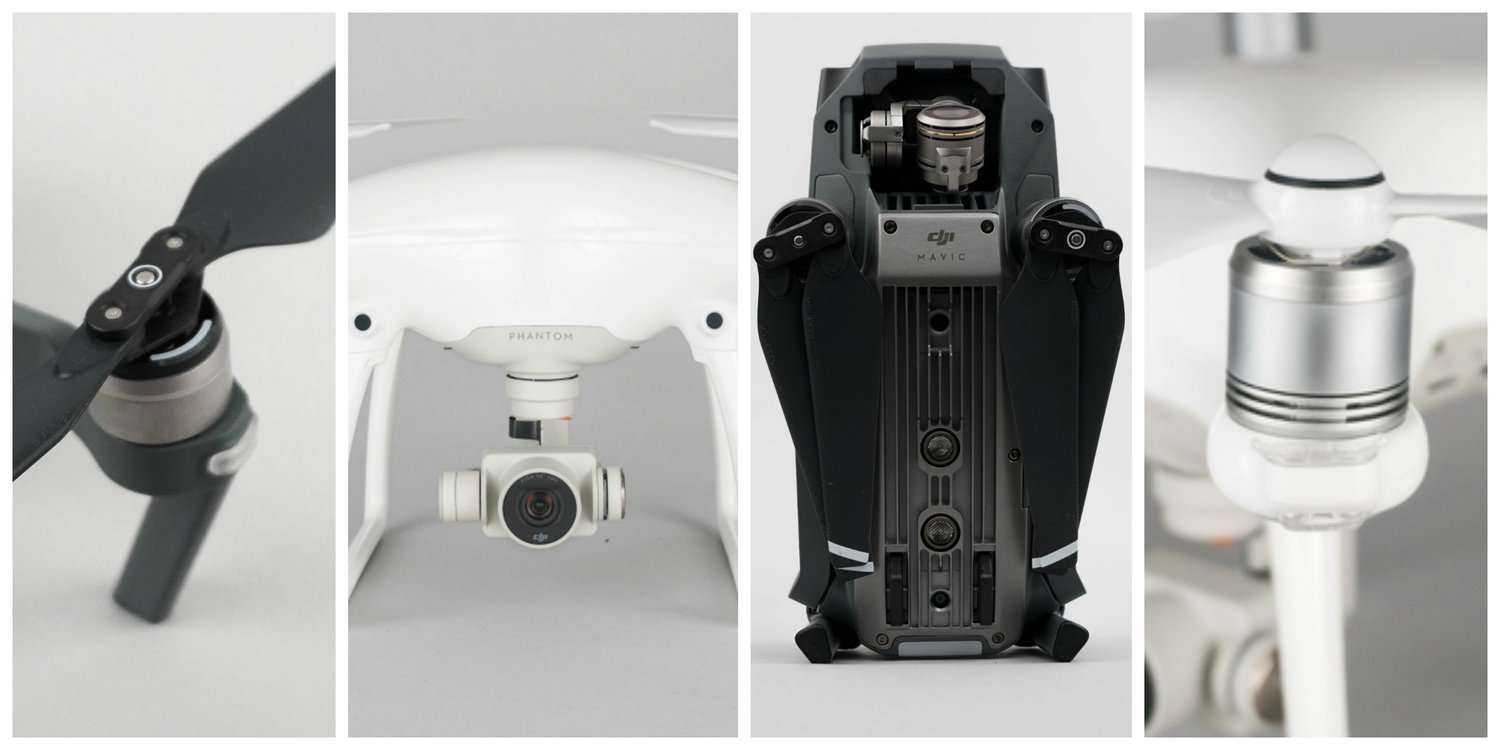 With an array of new features and the ability to fit comfortably in your pocket or bag, the Mavic Pro is set to be the new consumer drone that dominates the market. Though both drones are of high-quality and build, the Mavic's range, stability, camera quality, and obstacle avoidance system have all been improved to virtually make the Phantom 4 obsolete. There is no denying that both drones have revolutionized the consumer drone market in their own way, but the Mavic Pro's revolutionary foldable design will make it every pilots go-to choice to capture aerial footage anytime, anywhere.